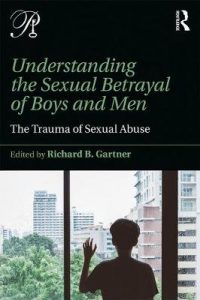 Understanding the Sexual Betrayal of Boys and Men: The Trauma of Sexual Abuse

Understanding the Sexual Betrayal of Boys and Men: The Trauma of Sexual Abuse is an indispensable go-to book for understanding male sexual victimization. It has become increasingly clear since the 1980s that men and boys, like women and girls, are sexually abused and assaulted in alarming numbers. Yet there have been few resources available to victims, their loved ones, or those trying to help them. Richard B. Gartner was in the vanguard of clinicians treating male sexual victimization and has written extensively about it, initially in professional papers, then in his landmark 1999 book for clinicians Betrayed as Boys: Psychodynamic Treatment of Sexually Abused Men, continuing with his 2005 work Beyond Betrayal: Taking Charge of Your Life after Boyhood Sexual Abuse. He has been a tireless teacher, clinician, and advocate for male victims of sexual abuse in the classroom, the lecture hall, and of course the consulting room as well as in newspaper, television, radio, and online interviews. Dr. Gartner has gathered together expert colleagues from the trauma, psychoanalytic, medical, and survivor treatment fields. Together, they have created a comprehensive guide to what was once thought to be a rarity but now is clearly an all-too-common occurrence. Understanding the Sexual Betrayal of Boys and Men looks at the realities of male sexual victimization, guiding clinicians and lay people alike to understand the complexities of the devastation it causes in victimized boys and men. It considers topics as diverse as: * sexual assault in institutions like the military, sports teams, schools, universities, and religious organizations * sex trafficking of boys and adolescents * neurobiology and brain chemistry of male survivors of sexual abuse * gender and sexual dysfunctions and confusions resulting from sexual exploitation and trauma * physicians’ treatment of sexually abused men’s medical problems * socio-cultural influences on processing and treating men’s and boys’ sexual victimization Understanding the Sexual Betrayal of Boys and Men is required reading for anyone working with male victims of sexual abuse and assault at any level – psychotherapists, rape counselors, attorneys, journalists, guidance counselors, physicians, clergy, graduate students, and lawmakers- and helpful to lay people interested in this often-unrecognized problem.