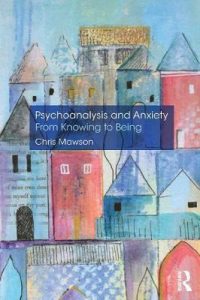 Psychoanalysis and Anxiety: From Knowing to Being

Psychoanalysis and Anxiety: From Knowing to Being combines psychoanalytic, existential and dramaturgical perspectives on the study of anxiety.

The book explores the implications for psychoanalysis of including a consideration of the being of the patient, and of the analyst. The central principle throughout is that the psychoanalytic and the existential belong together since it is the irreducible fact of anxiety that unifies them. It is in relation to anxiety that we are helped by other human beings to bear what is, and what we are.

Divided into four sections, the book begins with the distinction made in antiquity between anxiety and fear, before discussing its treatment by philosophers such as Heidegger, who regarded anxiety as the mood most disclosive of our being, and Kierkegaard, who distinguished between fear and angst. The book then explores how anxiety has been understood by major psychoanalytic theorists, including Freud, Klein, Winnicott and Bion, before a third part discusses how key principles of drama relate to therapeutic practice and theory, including a re-evaluation of the concept of catharsis, as well as Brecht’s concept of making strange the familiar. The pursuit of insightful knowledge in psychoanalysis is reconsidered in the book’s concluding section, with a shift of emphasis from psychoanalytic interpretations as statements of knowing to interpretive activity as a continuous process of becoming informed.

This insightful and wide-ranging volume will fascinate practising psychoanalysts and psychotherapists, anyone working in mental health, as well as scholars of philosophy and theatre.