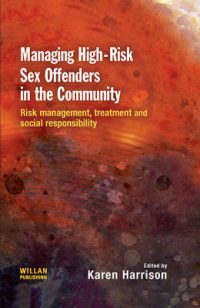 Sex offenders, and in particular paedophiles, have been the subject of much political and media attention, and there have been intensive debates about the best way of dealing with them. This book explores these issues: it evaluates the measures in use or being considered, including drug treatment, MAPPA, the use of the Sex Offender Register, satellite-tracking technology, restorative justice techniques, and a partial ‘Sarah’s Law’. It is concerned with high-risk sex offenders both when they are sentenced to a community penalty, and also when they are released back into the community after a custodial sentence. The introductory section opens with a discussion on how terms such as paedophilia are constructed and viewed, and then looks at how government policy regarding sex offending has developed over recent years; the following chapters question whether enough is being done to monitor the risk that high-risk offenders pose when released into society. A section on risk reduction covers the main methods of treatment, including sex offender treatment programmes, pharmacotherapy (chemical castration) and restorative justice and reintegration techniques. Section Two focuses on specific offender groups, including Female Sexual Offenders, Sexual Harm by Youth, Mentally Disordered Sexual Offenders and Intellectual Disabled Offenders. These chapters assess the ways in which these offenders are different to the ‘norm’ and look at how we should be dealing and treating these differences. The final section looks at social and moral responsibilities, including the patterns, prevention and protection of cyber-sex offences and media constructions of and reactions to paedophilia. In the final chapter the concept of dignity is addressed and the balance between community protection and the rights of the sex offenders involved is evaluated.

There are no reviews yet.

Be the first to review “Managing High Risk Sex Offenders in the Community” Click here to cancel reply.