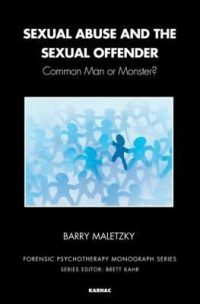 Sexual Abuse and the Sexual Offender: Common Man or Monster?

Sexual Abuse and the Sexual Offender examines the myths perpetuated by the media and widely held by the public, by providing actual data, with case examples, to demonstrate how sexual offending occurs, who commits these acts, what might cause such crimes, how sexual offenders are assessed, supervised and treated, and how to prevent such offending from occurring to the reader or to members of her or his own family.

This book is not a textbook on how to assess or treat sexual offenders for a clinical audience. Rather, it aims to educate the general public about how experts in this field diagnose, analyze, assess and treat such offenders and what steps they may take to prevent such abuse in the future. It describes, with actual case examples, how we recognize a variety of offenders, how to separate them and assess their risk, and how to avoid becoming prey to them.

The book is intended for those interested in the phenomenon of sexual offending and for those who have been affected by it or know someone, perhaps a family member or friend, who has undergone such abuse. It also should be of interest for families eager to protect their children from such abuse, and to college students interested in protecting themselves against such abuse in the future.

Of key importance, this book corrects the common assumption that all sexual offenders are depraved predators who are strangers to their victims. In fact, the vast majority of sexual offenses are committed by otherwise seemingly normal men who are well-known, and even well-loved, within their families and communities. Also of crucial importance will be the fact that the vast majority of sexual offenders, once treated, are at very low risk to re-offend. In fact, sexual offenders represent the lowest risk group to re-offend amongst all offenders released from prisons or other institutions. Sections include the separation of offenders into meaningful categories, the actual frequency of sexual offending, its possible origins, the justice system’s methods of supervising offenders, the instruments employed to measure risk, and how clinicians actually treat offenders in the therapy process.