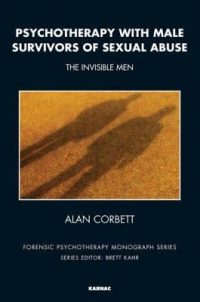 Psychotherapy with Male Survivors of Sexual Abuse: The Invisible Men

While the psychotherapeutic world has made significant strides in documenting the treatment of women victims of sexual abuse, little has been written on therapeutic responses to men. This may be understood as being partly due to the reluctance of male survivors to expose their history of abuse to clinical eyes. This may be exacerbated by a particular brand of masculine shame that causes male victims to be even more silenced than female survivors. Based on the author’s extensive clinical experience of working with children and adult victims of sexual crime, Psychotherapy with Male Survivors of Sexual Abuse looks at the long history of male sexual abuse, positioning it not simply as a new phenomenon, but one that has a long but undocumented history. Anonymised case studies provide the backdrop for in-depth explorations of various consequences of sexual abuse, including sexual addiction, profound depression, gender dysphoria, eating disorders, self harm, suicidal ideation, and dissociation. The potentially toxic impact of sexual abuse upon the partners and families of survivors is also examined, alongside the effect upon the therapist of working with the aftermath of sexual aggression. Working with men who have been abused, either in childhood or in adulthood, involves working with profound shame and secrecy, with many victims having lived their lives in a cocoon of repression and silence. This book is a huge step forward in breaking that silence.