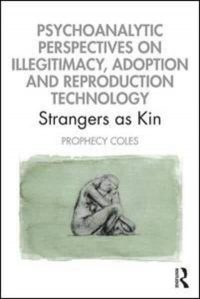 In this book, Prophecy Coles traces the existential history of the unwanted child with particular attention to the illegitimate child, linking myth, literature and clinical practice in the historical and legal context of adoption.

From the time of the Reformation in the sixteenth century until the early twentieth century the lives of such children were short-lived. The Adoption Act of 1926 did much to change the moral climate and the fate of the illegitimate child. It provided the child with a legal family and a name. There follows some unexpected difficulties that emerged after World War Two. Adopted children did not necessarily thrive, and young mothers who had been forced to give up a child born out of wedlock revealed their suffering. The sealed records of the illegitimate child’s origins became an issue. Attachment theory and the development of neuroscience underpin the theoretical approach of this book. Today, the children who are available for adoption are older and may be distressed by several years in care. Fundamental to helping these adopted children and their families there needs to be a multi-disciplined therapeutic approach to try and mitigate the damage that has often been done to the early infant brain through trauma. This book brings to life some of the adoption issues through the study of personal memoirs. Each chapter considers adoption from a different angle: the adopted child, the birth mother, the birth father, foster parents and adopting parents. The final chapter discusses some of the problems around adoption that have arisen again with reproductive technology and surrogate mothering.

This book will be of interest to all those who have been involved in or affected by adoption. It will be of special interest to those adopting parents who have not been properly prepared or supported in their magnificent work of taking on some of the most troubled children in our society.