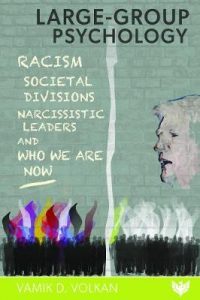 Large-Group Psychology: Racism, Societal Divisions, Narcissistic Leaders and Who We Are Now

Following the deadly 2017 white supremacist rally in Charlottesville, Virginia, numerous recent, and fatal, attacks on mosques, churches, and synagogues occurring worldwide, and increasing totalitarianism and paranoia spreading through many countries, Dr. Vamik Volkan could no longer ignore the urge to write a new book about large-group problems. In many countries, people are asking the metaphorical question ‘Who are we now?’ and coming up with seemingly opposite answers. This book looks into the reasons why this is happening. With a summary of Sigmund Freud’s ideas about large groups – which focus on the individual – Dr Volkan builds on this base to explain what large-group psychology is in its own right and applies it to present-day society. How it develops in adulthood, the psychology of decision-making and political leader/follower relationships, political propaganda, and exaggerated narcissism in leaders are all examined. We are all members of at least one large group. Looking into large-group identity provides background data for investigating the spread of racism, authoritarian regimes, malignant political propaganda, wall building, and interferences with democratic processes and human rights issues. Large-Group Psychology: Racism, Societal Divisions, Narcissistic Leaders and Who We Are Now is the perfect book for those questioning what is happening in society today and why.