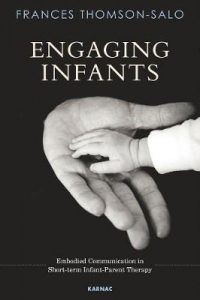 The book begins by describing, within a psychodynamic approach, some traits an infant may bring to an intervention, followed by descriptions of interventions in several specialised perinatal settings. Several chapters focus on parent-infant families who have experienced considerable anxiety and depression, and those who have experienced trauma and lived borderline experiences or of mental illness. An innovative intervention which successfully engaged young parents and their infants so that most of them felt they could understand and relate to their newborn infant is next outlined. Turning to most parents of an infant in a neonatal intensive care unit who feel traumatised which may impact on the emotional relationship with their infants, there is often a need for psychodynamic exploration before these difficulties can be modulated. With such interventions the staff become more containing and may more likely seek an intervention for a premature infant in their own right, attuned to the meaning of his or her mood and behaviour. Infant-parent therapy in paediatric contexts, infants in groups, and relating to infant and parents in the context of family violence are briefly described. Interventions where something seemed missed are detailed to guide thinking about how a therapist listens to countertransference and to guide in intervening. The book concludes with the importance of what therapist factors such as authenticity and playfulness in the therapist-patient relationship contribute to the therapeutic alliance, including an infant’s alliance and transformational moments, as well as the transference that infants develop to a therapist, and review of factors contributing to this approach being effective.